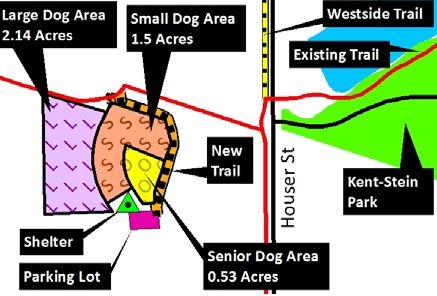 One of the most talked about projects for the past four years has been the creation of a Community Dog Park. The proposed off-leash dog park would be the first of its kind in the Muscatine area and would be located off of Houser Street across from Kent Stein Park on 14 city owned acres. Four separated fenced areas include a half acre area for senior dogs, a 1.5 acre area for small dogs, a three acre area for large dogs, and a training field attached to the large dog area that will be used for training, other structured events, and as a backup to the other fenced in areas when turf maintenance and recovery is needed.

The Muscatine Community Dog Park had an estimated price tag of $134,329, but that cost was reduced when planners decided to go with a phased approach with only the first phase included in the CAT application. The entrance shelter, two water fountains, six benches, trees, a shed, and four shelters were removed from the first phase but the enhancements will be added later. Another cost saving came from using surplus asphalt millings for the trail connector switching from concrete to asphalt for the parking lot.