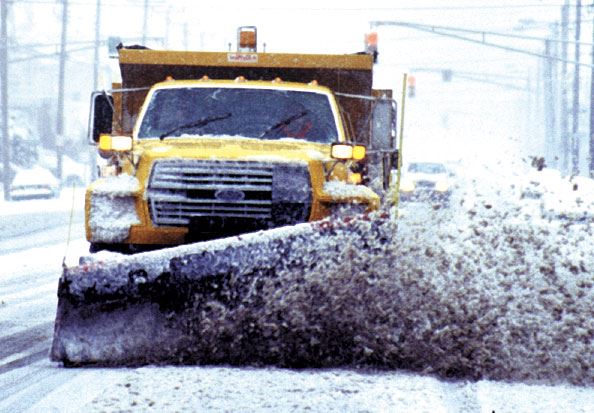 The City of Muscatine Snow Emergency Ordinance (Title 7, Chapter 10 of the City Code of Muscatine) prohibits on-street parking on posted snow routes during a declared Snow Emergency to allow plows to access and clear streets during extreme winter storms. This policy will have major effects on drivers who park their vehicles on the streets of Muscatine outside of the Central Business District.

For additional information regarding plowing or salting, contact the Public Works Department at 563-263-8933.

Snow and ice control is considered an emergency operation which must be initiated quickly and continued on a round-the-clock basis. If the decision to begin a full-scale snow and ice control operation is made after normal working hours, necessary City of Muscatine staff are notified immediately.

Snow and ice control is one of the highest winter priorities for the Public Works Department. Almost all other Public Works operations become secondary to the snow removal operation. In the event, a snow emergency is called by the City Administrator or his or her designate, Public Works staff works until all required chemical or abrasive control and snowplowing operations are completed.

It is unlawful for any person to remove snow from private property and place snow or ice on public property.

This ordinance covers "Dumping of Snow" and the "Penalty" involved.

Residential streets are plowed when the total snow accumulation exceeds 4 inches. In addition to plowing residential districts, city staff also applies abrasives or salt to designated streets. Sand or salt is spread at pre-planned locations such as on steep hills and at difficult-to-negotiate areas, such as street intersections.

Snow and ice control in alleys will take place after storm has ended and after city streets have been completely opened up.

During snow and ice conditions, emergency calls from Police and Fire Departments are given top priority in snowplowing efforts.

Help Us Help You
Shovels, snow blowers, sand and rock salt are all great items to have on hand during snow season.

Please do not shovel or blow snow on to Muscatine streets for motorists' safety, maintenance, and liability consequences.

When someone is hired to do snow removal be aware that snow moved from private property cannot be placed on Muscatine streets for motorists' safety, maintenance, and liability consequences.

Snow and ice removal is a difficult and time-consuming job. Patience is appreciated as city staff works diligently to restore streets to normal winter driving conditions.

Please remove vehicles from the street when it snows. This way we can keep our commitment to you to have snow removed from Muscatine streets as soon as possible.