After a series of destructive downtown fires with overwhelmed hastily assembled bucket brigades, the City of Muscatine issued a charter on January 7, 1875 to create its first volunteer fire company, the Champion Hose Company. The Rescue Hose Company and the Excelsior Hose Company in 1876, the Relief Hook and Ladder Company in 1877, and the Relief Hose Company in 1880 followed this unit. In addition to these 5 city companies, there were also 4 private fire brigades: Huttig Hose, Hershey Hose, Kaiser Hose and Roach & Musser Hose. These 9 units combined to give the city nearly 3 hundred volunteer firemen. With hand drawn hosecarts and plenty of spirit, they provided fire protection for Muscatine until the second decade of the twentieth century.

In 1913, after a terrible fire that destroyed 2 lumberyards and a bridge, 1 of Muscatine’s leading citizens, P.M. Musser, purchased a new American LaFrance fire engine for the city to help with future fires. Two men were hired to drive and maintain the vehicle. Fred Bilkey and J.P. Maurath were paid $62.50 a month to do these jobs, and their arrival signaled the inevitable demise of the volunteers. In 1915 a second pair of men were hired to give needed relief to the original 2, and the changeover became complete in December of that year when an ordinance was passed to create a department consisting entirely of paid members. It was also agreed that the volunteers would be disbanded. In January of 1916 the paid firemen began manning stations on Sycamore, Cherry and Hershey Streets. The city purchased 2 more fire engines so that each station would have 1. The original members were as follows: Chief J.J. Brown, Assistant Chief Fred Bilkey, Mechanic J.P. Maurath, and firemen John Leysen, Harry Freeman, Lee Schenkel, Charles Vetter, Herman Raethz, Charles Lemkau, Ed Priester, Charles Opelt, James Wise, and Louis Faulhaber. Chief Brown had previously served as chief of the volunteers during the last 3 years of their existence.

In 1926 the department expanded from 1 platoon to 2 allowing members to have every other day off. In 1965 a third platoon was formed which reduced a fireman’s workweek to fifty-6 hours. In the eighty-2 years since the department went professional, 8 men have served as chief: J.J. Brown 1916-1941, Harold Bierman 1941-1947, Paul Meerdink 1947-1954, Alex Bender 1954-1975, Paul Ziegenhorn 1975-1984, James Pumfrey 1985-1991, Steve Dalbey 1991-2009, and Jerry Ewers 2009 - present. Today’s department provides not only fire protection, but also emergency medical services, building inspections, public education, a hazardous materials response team, and a confined space rescue team. We’ve come a long way from bucket brigades and hand drawn hosecarts!

The Muscatine Fire Department is a 46 paid member department consisting of 3 shifts, Ambulance Billing Manager, Assistant Fire Chief and the Fire Chief. We also have a part-time secretary. The Muscatine Fire Department serves approximately 145 square miles for ambulance service and tiers with ambulance services in surrounding Iowa and Illinois counties. We also provide fire services to the entire City of Muscatine and its citizens as well as HAZMAT for Muscatine, Louisa, Washington, Keokuk, and Henry counties.

In 2020 we responded to a record 5,034 calls. The Fire Department invests numerous hours each year in EMS training, fire training, HAZMAT training, high angle rope rescue training, and confined space training as well as other types of training from outside instructors brought into the department. We also do numerous hours in Public Education to all the grade schools in Muscatine and routine Fire Inspections in Muscatine. 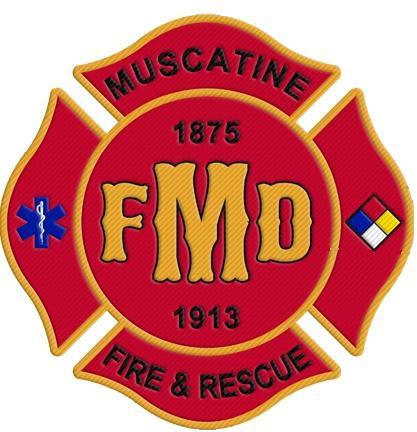